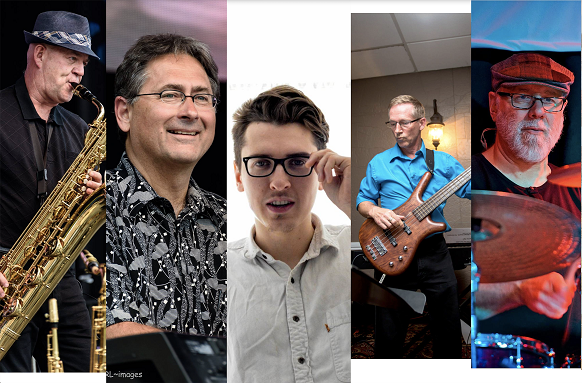 As one of Waterloo Region's best-known and most popular jazz bands since the late 80′s, Top Pocket's style has ranged from be-bop, fusion, Latin, and traditional jazz. These guys play with tremendous versatility and depth!

Check out their pedigrees, these guys have backed, gig'd, and headlined with some of the top names in the biz, and they play all-original top notch charts.

Regulars at the Jazz Room and the Registry Theatre, Top Pocket will deliver songs from its three CDs (including Rocket in my Top Pocket) and from an upcoming CD still in the works. 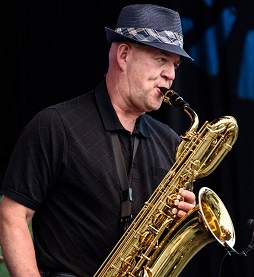 Raised in a musical family Robin started singing at age two and never stopped. At age 6 he started Clarinet lessons and grew up in the Preston Legion Band where he performed from age 8 until 19 years of age. Robin has been a full-time musician for 46+ years and private teacher.

In 2019 retired from Big Band Theory and stayed on as sub “Friend of the Band” periodically replacing members of the sax section when those players were unavailable. He also has been the Musical Director of the Local New Horizons Seniors Concert Band and Jazz Ensemble for the last 6 years. Robin has been a member of Top Pocket for about 10 years and composes original music for the band as well as playing saxophone and flute.

In 2012 Robin wrote and produced a Musical Tribute to the Canadian Forces returning home from Afghanistan called “Kandahar A Modern Soldier’s Story”. To rave reviews.

Robin writes and arranges music and performs to this day and hopes to continue to do so into his sixth decade. 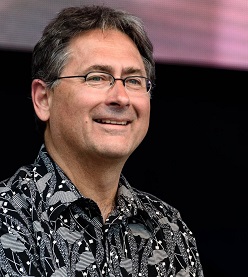 Paul Stouffer has performed in a variety of styles and groups since his high school years. He studied music formally with Dr. Glen Kruspe and the Gordon Delamont Series in Toronto. In the early seventies, Paul was musical director for Robbie Lane and the Disciples. He has worked at Sherwood Music in Kitchener since 1977 where he is the manager of the keyboard department. Paul has adjudicated pop and jazz piano at the Stratford Kiwanis Music Festival. He is a busy instructor at his own music studio where he teaches piano, as well as jazz theory, composition and improvisational. techniques. A talented and experienced arranger, he has worked with a number of artists including local folk/roots favourite Shannon Lyon. He also works in theatre and has arranged music for the Blythe Festival. In addition to Top Pocket, Paul freelances and leads his own pop and jazz ensembles.

"With a beautiful touch, Paul can really swing." - Lawrence McNaught, The Registry Theatre 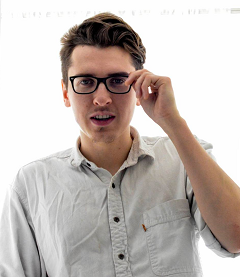 Alex Showdra has been making music for his entire life. From playing guitar with his grandfather at only three years old, to the numerous pop and rock bands in high school and post-secondary - music has always been a priority to him.

This passion led him to study music post-secondary and earn his Bachelor of Music in 2017 from Wilfrid Laurier University. During his time in school, Showdra had many opportunities to explore a plethora of musical styles. He’s received numerous coachings and masterclasses from renowned musicians such as Remi Bouchez, Glenn Buhr, Jorge Caballero, the Canadian Guitar Quartet, Terry McKenna, the Penderecki String Quartet, and Pavel Steidl.

To this day, Showdra continues to work as a full-time musician and teacher in Southern Ontario. His recent projects include: The Bel Air Jazz Combo, Top Pocket, the Controversial Sharks, Banjo soloist with NYO Canada during their migrations tour and his own singer-songwriter material. Showdra has also had the opportunity to aid in the creation of Balute Inc.’s educational module for their “Dijilele” product and is credited as an author. Most recently, Showdra incorporated his business and is now operating as “Showdra Music Services Inc.”. Showdra’s business provides a multitude of musical services for hire like performance, teaching, production, and composition. 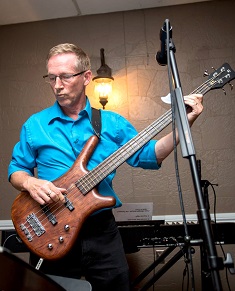 Michael Bergauer began studying under his father Mike Sr., a well-known local musician and noted music educator. He began playing professionally at the age of fourteen with the dance band Brass Line.

A true veteran, Michael has worked with a variety of ensembles for the past 30 years including local big band legends Opus II and The Dublin Corporation.

In addition to the Top Pocket, Michael's current performance schedule also includes the Andriy Tykhonov Quartet and Opus II, which Michael recently reunited after an absence of over 20 years. 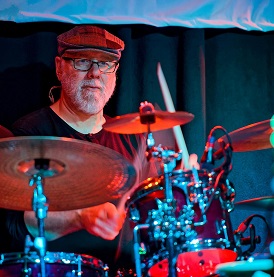 Don McDougall is a graduate of the Humber College Music Program. He began studying drums at six years of age with the late, noted percussionist Gary Tomlin. At the age of 17 he began his professional career with Opus II, a nine-piece show band. Over the next 39 years, he has performed or recorded with legendary jazz musicians Pat LaBarbera, Peter Appleyard, Nancy Walker, Duncan Hopkins, Mark Eisenman, Jane Bunnett and Blues great Mel Brown. He has been the drummer/ percussionist /producer and leader with local jazz favourites “Top Pocket” for 34 years, releasing two albums (2010’s “11:11” and 2015’s “rocket in my (top) pocket”). Spent 25 years playing drums on the Canadian country music scene with numerous artists including recording artist and numerous CCMA Award Nominee Colin Amey. For the last 10 years, Don has been performing and recording with the Gary Cain Band releasing their debut recording “Twangadelic Bluesophunk” in 2017. Following overwhelmingly positive world wide response to the recording, the band was a semi-finalist at the 2018 International Blues Competition in Memphis, Tennesee, played a sold out Massey Hall opening for George Thorogood and the Destroyers, and performed at the Augusti Bluus Festival in Haapsalu, Estonia. In 2019 they toured France and Spain in June, Northern Ontario and the Midwest United States in July and Texas in September.

He was also Second-in-Command and Assistant Director of Music for the Ceremonial Band of the Waterloo Regional Police Service from 2011 to 2016.